Also on the Web

The Portland Film Festival kicks off September with seven-straight days of movie-watching, movie-celebrating, movie-educating and even movie-making of its own. The festival has become Oregon's largest film event. It will screen 80 narrative and documentary features, as well as 134 short films, culled from 3500 submissions.

In addition, the festival will hold two, Lifetime Achievement Tributes. One is for stop-motion animator Will Vinton. The other is for sculptor and puppet-maker Wendy Froud who has worked on Star Wars and for Jim Henson films.

75 classes, workshops, panels and networking events will be led by award-winning professionals and experts in the field of film. People who attend will also be treated to a Screenplay Competition. Four finalists from 380 submissions have been chosen and actors will read the entries aloud for a live audience. One of those entries will win a $20,000 production grant to make the chosen screenplay. 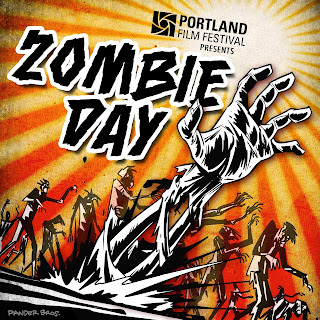 The festival will also put together an unprecedented, live event known as "Zombie Day Apocalypse." It's a free event for any and all festival-goers. It will occur on Labor Day. The goal is to get over 2,000 people to participate in order to establish a new Guinness Book World Record. Those thousands of festival-goers will be extras in a short zombie film directed by George C. Romero, son of George A. Romero, the legendary zombie-filmmaker.

Last year, the festival drew 23,000 ticket holders and 240 filmmakers. Many of whom came from outside the United States, as well as 1200 industry members. This year hopes to see as many as 350 visiting filmmakers. The event starts on Tuesday, September 1 and ends on Monday, September 7.

Opening Night will screen two films, a narrative feature and a documentary feature. The documentary is GRU-PDX, about Brazilian band Quarto Negro and its six-month journey to Portland to record their second album, exposing the newly established music scene in Rip City. The narrative feature is Birds of Neptune, the story of two sisters living in Portland with a mysterious past.

The Closing Night film is Batkid Begins: The Wish Heard Around the World, the real-life story of the Make-A-Wish Foundation working in San Francisco to turn a 5-year-old boy into the caped crusader for a day.

10 films will go reel-to-reel against one another in the Narrative Competition. Some notable selections include 6 Angry Women, a drama that puts us in a jury room to deliberate over a case eerily similar to the Trayvon Martin shooting. There's As Good As You, a comedy about a woman who asks her late wife's brother to be her sperm donor, and Touched With Fire, a film starring Katie Holmes as one of two manic depressives in a hospital who juggle love and their conditions.

10 films will also vie for honors in the Documentary Competition. Some of the outstanding titles include Audition, a romance portrayed as 100 actors compete for two lead roles, Business of Amateurs, an ex-athlete seeking answers about the injustice of student-athlete rights, and Lost and Found, one year following Japan's largest earthquake a friendship forms between people on opposing shores.

A special screening of Hustle & Flow will be held in honor of the Oscar-winning film's 10th anniversary. Trailblazing cinematographer Amy Vincent will be in attendance to offer insight into the creation of the film and some of her other work. Vincent is one of few female cinematographers in a field that is very underrepresented.

If the City of Roses weren't put on display enough, the festival also has a section of films that focus on the Northwest area. Three films have been picked for this section. The Black Sea concerns a group of friends on holiday where one of them disappears. Deep Dark has a suicidal sculptor in the surreal. Vintage Tomorrow is a documentary on the explosive growth of the Steampunk movement.

To learn about even more films, for the full festival lineup and to purchase passes and tickets, go to PortlandFilmFestival.com.